The Jewish Children of Förthof

The „Forgotten“ Camp for Hungarian-Jewish Forced Laborers of 1944/45

Roads played a subordinate role in Förthof near Krems, 80 kilometers from Vienna,  because Förthof is located on the Danube. In addition to the river, viticulture was important. Before the Danube bridge was built, there was an overpass towards Mautern, the rafts Danube down stopped here. The men here were wine growers and raftsmen. The entrance to the Wachau was a bottleneck, just Förthof.

That was long ago. Wachau railway was built and has been only a summer pleasure in the meantime, and the main road to the Wachau built in the early 1960s now leaves Förthof behind.
If the winegrowers wanted to go to the vineyards on the mountain, they had to do so on a narrow path. There was talk of building a road for a long time. The freight road to the Pfaffenberg and on to Loiben is used today without much ulterior motive. So what? A road is there to drive on, not to think or remember.

Everything has to do with the Nazi period
At least now it dawns on the reader, because the signpost remembrance is set up again. And as always in our home country, who thinks and asks, who starts digging, after a short time has to discover that everything has to do with the Nazi period, that the „Nazis“ laid the foundation. This does not make any difference for model companies such as the wine grower association,  for steel works Krems and the goods road to the Pfaffenberg. In the Nazi era, however, labor always meant forced labor, meaning deported slaves deprived of their rights from the „East“.

Jewish children were forced to drag this stones.

In the case of the freight route in Förthof, it was Hungarian Jewish forced laborers who had to work here from 1944 onwards. For decades, this was concealed and, by chance,  I received a message and I went in search.
The story of the Jewish children and adults who had to quarry and drag stones here has been passed on for two generations. Christine Jell , who lives in Stein today and was born in Förthof , told the story a few months ago at a family party and a relative from Egelsee, Helmut Kirchmayer, dropped me a line because this story should not be forgotten.

Postcard of the inn Hillinger in Förthof.

The forgotten forced laborers?
Why the story has been ignored by the forced laborers for so long? The response of Christine Jell is as shocking as it is significant. „We grew up with the fear of talking about Jews, nobody dared. In our home we listened to “enemy radio”. As a child I never understood why we needed to be quiet. In Stein, we had a Nazi who sneaked around to the end of the war and listened to see if he heard anything and reported to the police. That’s how I grew up. The man still lived in Stein after the war. The fear was always there. “

Do not talk about it was the motto. For the family of Christine Jell, however, that did not mean that you could not do anything. „My grandmother was sorry for the Jewish children. Everyone knew that punishment forbade them giving them food. In Förthof we also had a very ruthless Nazi everybody was afraid of. “ 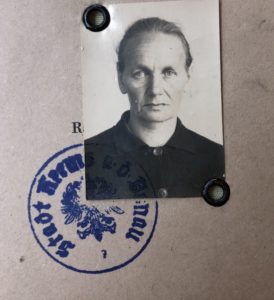 Ms Leopoldine Beyer was over 50 in 1944, when she said that if you could do something, then it was the older women and so she and two other women decided to hide pieces of bread, potatoes, dumplings the way through the forest that the children and adults had to take. Since the food was gone the next day, there was hope that it had been found by those it had been meant. So far the story, it was then forgotten and passed on in hints. Not more.

Suddenly there were three foreigners in the yard, two men and one woman. The men with hats and beikels were also recognizable as such to those who had no idea of ​​Jews. One of the men spoke German and asked who had hidden the food in the forest during the Nazi era. Whether the small company came directly to Frau Beyer’s house, whether they had been asked and sent to neighbors, if they had been watched out of the window, and then they had come to the house to see what the inquiring looks of the strangers should mean , who knows. The three came to ** Beyer. The three siblings had traveled to Europe with a tour group, they wanted to come to the place where they were kidnapped and had to work as a child. They wanted to finish the story for themselves and say thank you, symbolically. For each child, they left $ 10 Frau Beyer did not want to accept the money, it had been a matter of course, she said. 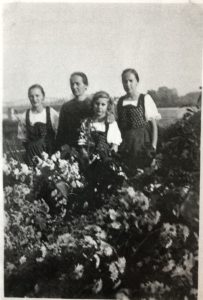 Leopoldine Beyer in the middle and her daughter on the left.

History returns, after so many years and is forgotten again. What the name of the three siblings was, where they had come from in Hungary, nobody knows. Only that an uncle had come after the liberation to take the three children with him. Mrs. Beyer forgot to ask in the excitement, or perhaps did not even ask.

To this day Christine J. carries the dollar bills in her purse. „A kind of lucky charm“. Some time ago she started to create a family tree until 1730. The time of National Socialism has come up again, which has not been mentioned at all in the local history book about Förthof. The book was published in 1994. The title is significant. „The Förthof. A village of wine makers fighting for survival. „The foreigners did not belong to it.

From Förthof, no one is left anymore to remember. By chance, Christine Jell got into conversation with a woman from Stein, a few years older, an Emsenhuber whose parents had a small general store. Ms Emsenhuber’s mother was Hungarian or could speak Hungarian and a few months ago the conversation also came to Förthof’s forced laborers . 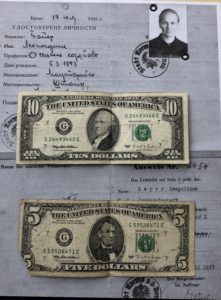 The woman remembers another mosaic stone: „We went to Förthof and brought them mattresses and blankets, because the children had to sleep on the floor.“ The circumstances remain in the dark.

Förthof what Maria Grengg wrote
It cannot be a coincidence if the Nazi writer Maria Grengg , who was born in Mautern and is still honored with a scrafitto at the birthplace and a street name in stone, in her novel „Peterl “ (1932), an orphan, whose fate is uncertain  has him stand with the noble Hahndl , the inhabitant of the „Ratzenburg “ on Mautern bridge. The boy sits on the railing, both look at Förthof and the view of the water leads to a philosophical view of life.

„He saw in this sweeping river the image of all human existence. An eternal attempt to come around cliffs, an urge in pressing tightness. To pour out between friendly grounds. Through dirt and filth, past blissful beauty. Agitated and dangerous; clearing and reflecting the sky and the stars. Frothing up against resisting, coping with it, breaking it. There may not be anything that can carry the German soul more to the mysterious showers of deep purity of nature than the wandering waters of a great river. “

The fate of Peterl comes to a happy ending, no wonder a German boy with a German soul. There were them, the people who denounced, betrayed and tortured the defenseless, and there were them, the people who dared to help. Nobody wanted to talk about it, because fear remained.  Maria Grengg was happy to welcome Adolf Hitler 1938.  But she didn’t need Hitler to know who are the bastards in our society: the Jews. „Peterl “ already written in 1932. A howler, the Jew who is guilty of everything and shuffles around the corner. Deliciously scary. We in Austria already knew in 1932 and before that the Jews are evil…
Till today there is a street named after Maria Grengg in Stein, but 2019 no street is named after a victime of the shoa.